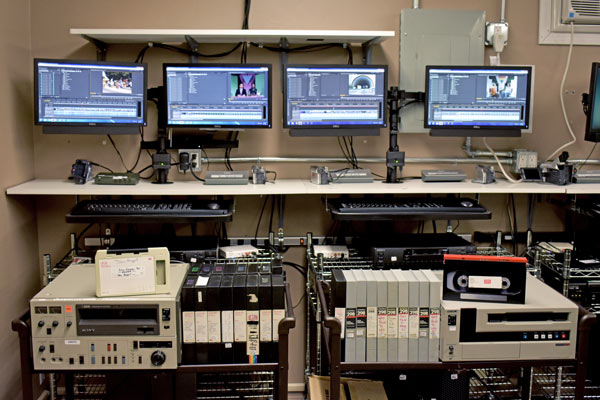 AV recently converted almost 100 hours of broadcast Betacam SP, 3/4″ U-matic, and S-VHS tapes to High Definition Files for a Northern California political action committee. The local San Francisco Bay Area committee has been advocating for the civil rights of LGBTQ+ people in the surrounding counties since 1984. The tapes provided to AV were primarily 1980’s broadcast recordings from a public access cable TV program which provided a creative platform for those in the local LGBTQ+ community. The subject material consisted of art, literacy, interviews, talks with healthcare professionals, highlights of local members, and commentary in relation to the LGBTQ+ community. AV Conversion Services was happy to transfer and preserve these historic tapes to Digital Files so they can be edited, shared, and played for many more years to come!

We used our professional 3/4″ U-matic and Betacam SP Decks to capture the broadcast tapes straight into our editing suite. The S-VHS tapes were captured with a built in TBC stabilizer using our JVC S-VHS decks. The TBC helps to balance unstable video and produce a more steady picture. AV Conversion Services provides routine cleaning to the heads of the decks to ensure the best image and audio possible. We also use each tape only one time as a playback source.

To obtain the best possible audio, AV captured both the left and right audio channels and raised the gain to about -6db. Then, we applied noise reduction to sweeten and enhance the sound.

AV edited out any extra dead air and/or TV Snow. Thus, the digital files were only the recorded portion of the tapes.

AV output the files using the H.264 Codec (maximum bitrate) and enhanced the resolution to 1280 x 720 60p. 60p enhances the videotapes because it adjusts the interlaced even and odd fields to become 60 full frames per second. This allows for more seamless motion and helps produce a sharp picture without any jagged edges. Now the files are HD 720 60p mp4 Files that can be edited, uploaded, shared, or played almost anywhere.

Each tape became a separate mp4 and raw file. AV labeled each of the files by number and transferred them onto a single Hard Drive. 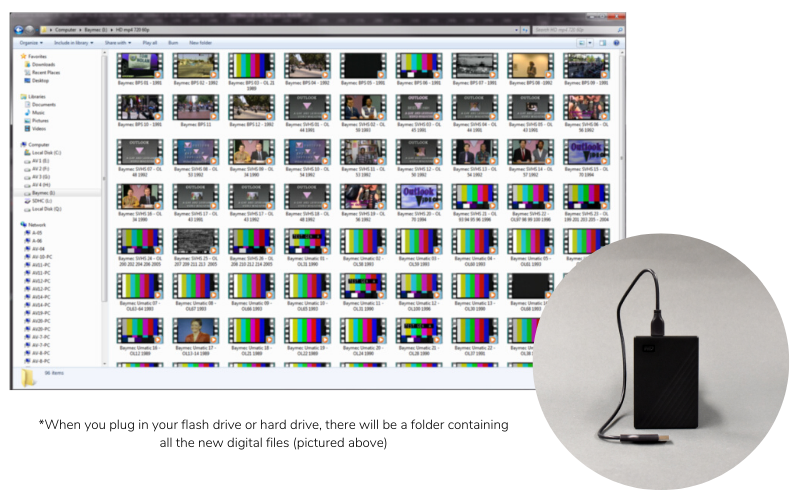 The 3/4″ U-matic, Betacam SP, and S-VHS tapes are now preserved as HD mp4 Files and reside together on a single USB hard drive!

Videotapes wont last forever and will start to degrade over time so its good to know some of the most common signs that your tapes are breaking down. If you hear a high pitched screeching sound when trying to play your tapes, it’s possible they have sticky-shed syndrome. Sticky-shed syndrome happens when the binders on the magnetic tape start to break down. Once these binders begin to degrade, the tape sticks to itself which prevents playback. These binders may also begin to break down when they absorb moisture. This is especially common when tapes have been stored in a humid environment.

Do you have Videotapes you would like Converted to Digital Files?

Check out our Video Transfer pages for options and pricing.